Majority of MPC rate-setters back hike of 0.5 percentage points despite fears UK is entering a long recession

Mortgage payers are braced for higher borrowing costs, after the Bank of England pushed up its base rate by 0.5 percentage points to 3.5% despite saying inflation has peaked and Britain is about to enter “a prolonged recession”.

The Bank hiked interest rates on Thursday for the ninth time in a year, to the highest level in 14 years, but told borrowers to prepare for fresh increases in the new year.

Members of the Bank’s monetary policy committee (MPC) voted to increase the cost of borrowing after the consumer prices index (CPI) in November showed annual inflation of 10.7%.

Governor Andrew Bailey said a fall in CPI from 11.1% in October represented “the first glimmer” that inflation had begun to ease and he expected a rapid fall, “probably from the late spring onwards”.

His comments, which appeared to show further rate rises could peak below forecasts of 4.5% by the end of next year, sent the pound tumbling against the dollar by 2 cents.

Bailey forecast skill shortages would push wages higher and prevent inflation falling towards the Bank’s 2% target as fast as he hoped.

“There is a risk that [inflation won’t fall] in that way, particularly because the labour market and the labour supply in this country is so tight.

“And that’s why, really, we had to raise interest rates today, because we see that risk as really quite pronounced.”

“It looks as if housing debt will be a particular pressure facing millions of households in 2023,” he said.

Financial markets expected the rise, which was heavily trailed by Bailey, and the chief economist, Huw Pill, after they said “more needed to be done” to bring down inflation, before adding that a repeat of November’s 0.75 percentage point rise was unlikely.

The Bank of England has raised the UK base interest rate to 3.5% 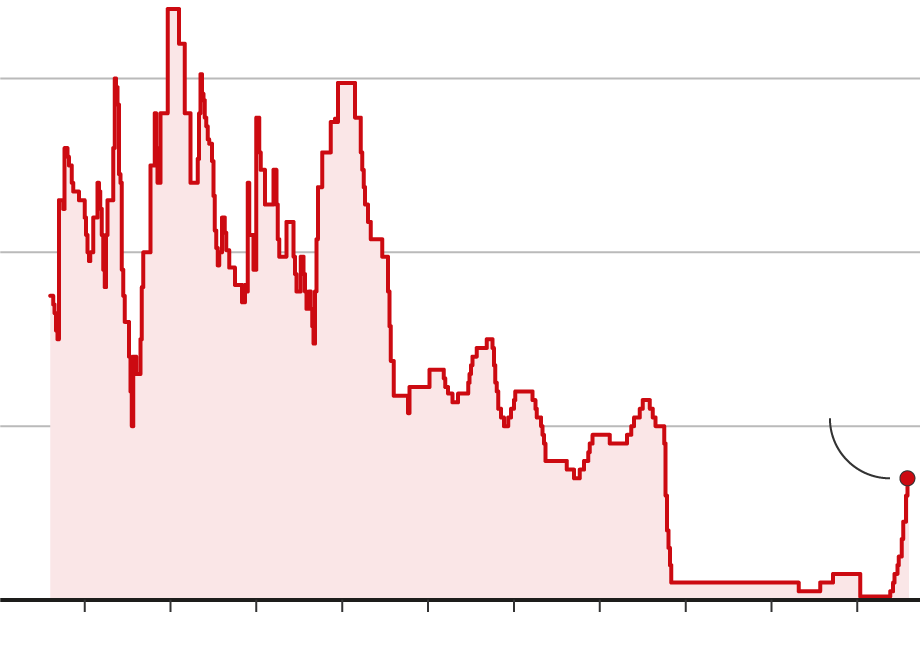 In a three-way split vote, when two members of the nine-strong MPC voted to keep the base rate on hold and another member pushed for a more aggressive rise, the MPC said there were “considerable uncertainties around the outlook”.

While global supply chain blockages have eased, bringing down the price of many commodities and goods since they rose sharply earlier this year, cost pressures have remained throughout global markets.

With cold winter weather biting much of Europe, the path of gas prices and the cost of food could rise, keeping inflation higher for longer.

The US Federal Reserve and the European Central Bank have signalled that they will ease back on rate rises in 2023 following forecasts that there is a strong prospect of a recession and job losses across the industrialised world.

Russia’s invasion of Ukraine continues to disrupt the supply of gas and some foodstuffs, adding to inflationary pressures.

The Bank’s report said there were several indicators showing the economy had weakened since the summer. It expects a 0.1% contraction in GDP in the last quarter of 2022, which would put the UK economy officially in recession after a 0.2% contraction in the third quarter. The downturn is expected to last well into 2023, though it will be milder than expected in the Bank’s forecasts last month.

Giving a strong indication that the housing market has already weakened, the number of home purchases has fallen to below 60,000 a month, the lowest since 2013.

Bailey voted with the majority of MPC members for a 0.5 percentage point rise. Two members of the MPC, the LSE professors Swati Dhingra and Silvana Tenreyro, said the cost of living crisis facing millions of households and previous interest rate rises meant the economy would slow without further rate rises.

This site uses Akismet to reduce spam. Learn how your comment data is processed.